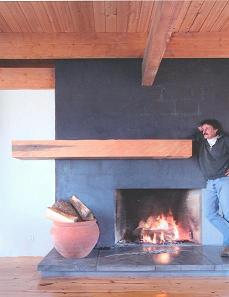 A native Oregonian, Brian Cameron was born in Seaside in 1952. He has lived his entire life on the north Oregon coast as did two generations before him. This long exposure to the peculiarities of the area has resulted in a bond with the culture and traditions of the North West. Rugged individualism, hard work and a sense of oneness with, and appreciation of nature are all aspects of this culture. These are qualities well suited to an artist.
Primarily self taught, he leaned, as a young man, the art of furniture making and the characteristics and qualities of wood along with the methods and tools used in shaping it. The study of traditional Japanese techniques in architecture, woodworking and block printing led to an appreciation of the power of simplicity in line and space. Incorporating these ideas into furniture design, he became well known both for impeccable craftsmanship and for creating tables which are recognized, in essence, as abstract sculptures designed for utilitarian use.

As a career in furniture making developed he began incorporating glass and black concrete into his wood furniture, and although his tables became more and more free in their design, in time, the constraints of adapting each inspired sculpture to a functional purpose became a burden. To work in other mediums where free expression is unhindered, drew him to study the master sculptors like Rodin, Brancusi, Moore and Baskin.
Soon he began to make figurative sculptures in both wood and concrete, and he began creating 3 dimensional hanging constructions. Carving NW Coast Native American ceremonial masks fulfilled a desire to explore his Cherokee heritage. All of this became a new release of artistic energy and opened the door to creating artworks with a clear subject matter. Traditional Japanese block printing was another step in that direction. Focusing on nature for inspiration, the crow and raven became a dominant theme in much of his work as the copious use of black continued to be a signature aspect of his work.


At this point the desire for experimenting with color was developing to some degree. The soft, translucent hues found in traditional woodcuts was a challenge to emulate, but feeling constrained again by the limits of block printing techniques the freedom of applying colors in broad strokes with varying textures on a larger scale was calling to him.


Now he began painting and experimenting in different styles as he studied Mark Rothko, and Portland legend Michael Russo and then on to Monet and the old impressionists, producing large paintings layering acrylic on masonite or canvas with knives, brushes and even sticks to explore the nature of light and color in both abstract and figurative work.
Drawing inspiration from the raw elemental beauty in nature, Brian attempts to express a serene harmony in much of his work. In his abstract paintings, he strives to capture just the essence of the subject, inviting the viewers to use their imagination, thereby participating in a creative exchange. In his sculptures, which are often human forms, he begins with line on paper. Then, with mallet and chisel in hand, he becomes totally absorbed in the process of bringing a living character out of the block of wood. He attempts to imbue the subject with some aspect of human emotion, animating the inanimate.

“Inspiration.., that perfect, intuitive moment, when time stops when logic and fear are tuned out, and pure, uninhibited creativity is flowing effortlessly onto paper, is elusive, but when it occurs, the piece of work is truly authentic and there is a completeness and value to it that only some will perceive but is always known by the artist "

Brian Cameron’s work was originally available exclusively in the Cameron Gallery, which he and his wife Leslie owned and operated in Gearhart, from 1992 to 1996, and by commission through interior designers. From 1996 through 2002 his work was regularly shown at the Blue Pear in Portland, at the Triad Gallery in Newport and at the Beppu Gallery in Pacific City, Or. He has participated in many juried and invitational shows at the Cannon Beach Arts Association Gallery in Cannon Beach, Or., and has been represented continuously at the Riversea Gallery in Astoria ,Or. since 1998. In 2013 he was juried into the Portland Art Museum rental sales Gallery for permanent representation. In 2018, Warner Bros. contracted with Brian for the use of  seven of his paintings in their new television series "The Perfectioist".
Brian works from his studio beside his oceanfront home on the beach just north of Gearhart, Oregon where he lives with his wife Leslie.

A native Oregonian, Brian Cameron was born in Seaside in 1952. He has lived his entire life on the north Oregon coast as did two generations before him. Though his father was a small business owner, his mother, a music teacher, provided a home in which artistic expression was a cornerstone. He was encouraged to study and to find outlets for his musical and artistic talents. After heading to college in 1972 with an art scholarship, this 3rd generation ‘Coastie’ embarked on an early career as a maker of fine furniture, incorporating the elements of clean Japanese design and flawless joinery. He later shifted to figurative sculpture in wood and even concrete, before delving into printmaking and ultimately painting.

Early paintings were primarily abstract as were his masterpiece furniture designs. He made a gradual turn toward representational paintings end enjoyed painting near photo-realistic works for a time, but still felt compelled to return to a more abstract approach.
Brian works in both oils and acrylics, preferring to shy away from too much detail by employing the palette knife much more than the brush. This may be a throwback to sculpting in some regards as the knife allows a more painterly 'building' of the piece. As one who is heavily influenced by nature, he is attempting to express a serene harmony in much of his work. Although many of his paintings are still representational, he often slides into near abstraction, striving to capture just the essence of the subject, inviting the viewers to use their imagination, thereby participating in a creative exchange.

Cameron says of the creative process   “When you get going, the logical side cuts out and there is a great meditation there. That  perfect, intuitive moment, when time stops, when logic and fear are tuned out, and pure, uninhibited creativity is flowing effortlessly onto canvas, is elusive, but when it occurs, the piece of work is truly authentic and there is a completeness and value to it that only some will perceive but is always known by the artist.”  Brian works from his oceanfront studio in Gearhart Or. where he lives with his wife Leslie.

2016   Stories From The Edge invitational